Finished! I fixed the backgrounds of the first stanza, giving them static backgrounds so it wasn't as jerky. The only problem is that I've lost quality, which I might be able to fix by reducing the dimensions.

Posted by Edwin Burrow at 13:25 No comments:

1.     You must use the poem in your illustration/s (hand-drawn or typeset)
2.     No Quentin Blake rip-offs
3.    You’re not allowed to show an elephant in its entirety.

And the poem itself;

Jumbo Jet
I saw a little elephant standing in my garden,
I said 'You don't belong in here', he said 'I beg you pardon?',
I said 'This place is England, what are you doing here?',
He said 'Ah, then I must be lost' and then 'Oh dear, oh dear'.

'I should be back in Africa, on Saranghetti's Plain',
'Pray, where is the nearest station where I can catch a train?'.
He caught the bus to Finchley and then to Mincing lane,
And over the Embankment, where he got lost, again.

The police they put him in a cell, but it was far too small,
So they tied him to a lampost and he slept against the wall.
But as the policemen lay sleeping by the twinkling light of dawn,
The lampost and the wall were there, but the elephant was gone!

So if you see an elephant, in a Jumbo Jet,
You can be sure that Africa's the place he's trying to get!

I've decided to illustrate this poem as an animation, so far I've story boarded the sequence and made a start. 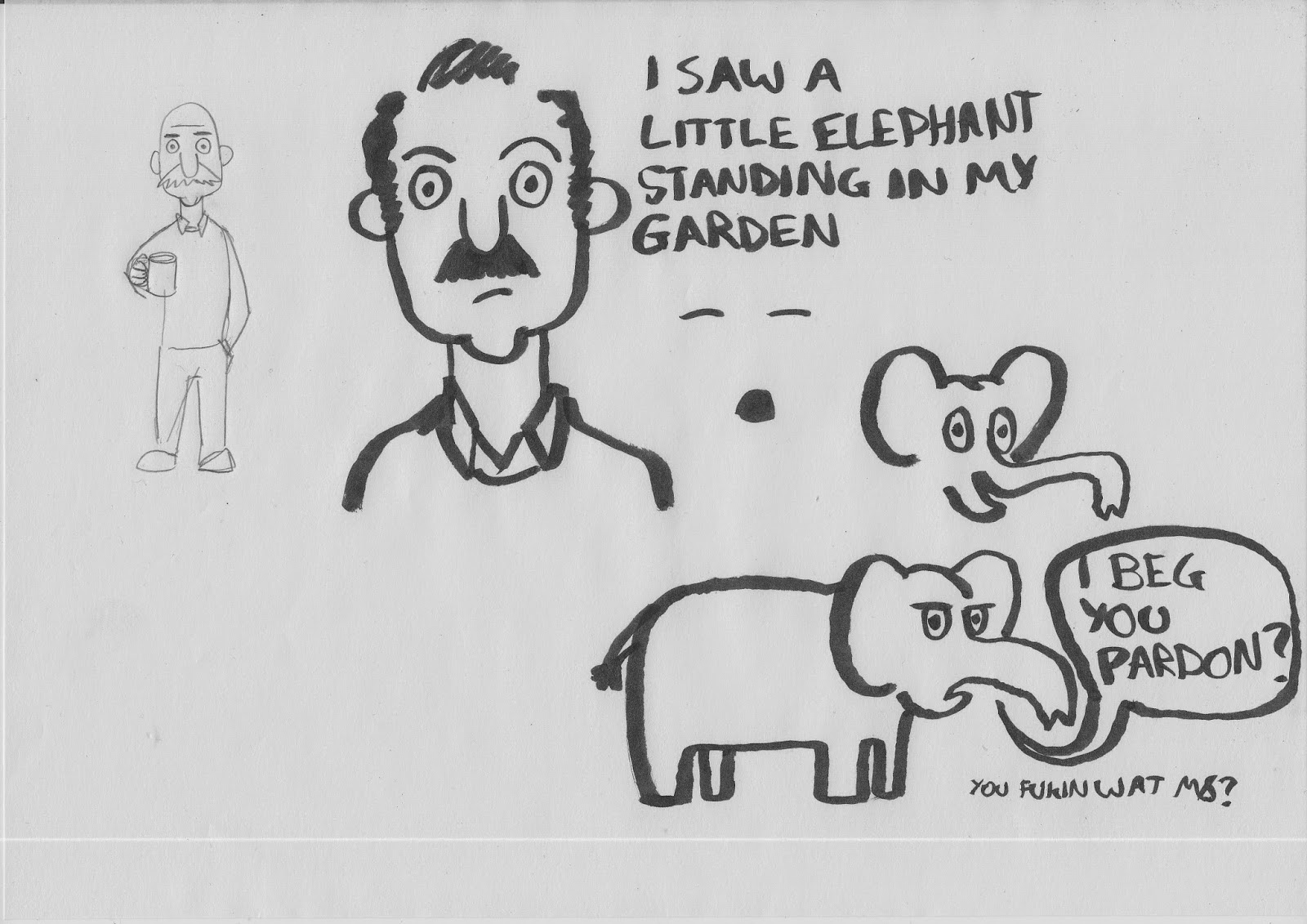 Some initial drawings to get the ball rolling. 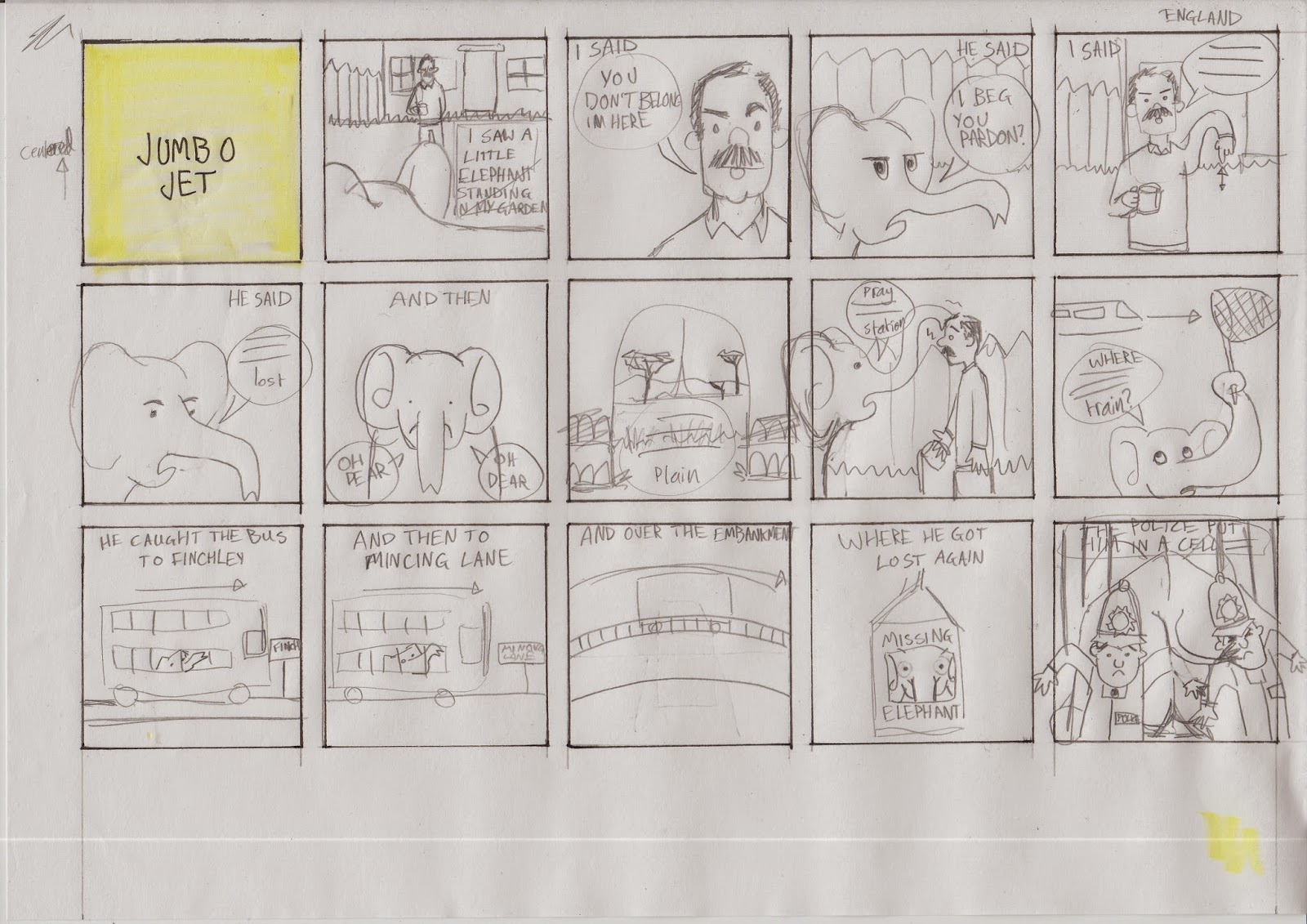 I then drew out a story board which I will use, probably improve on during the process. 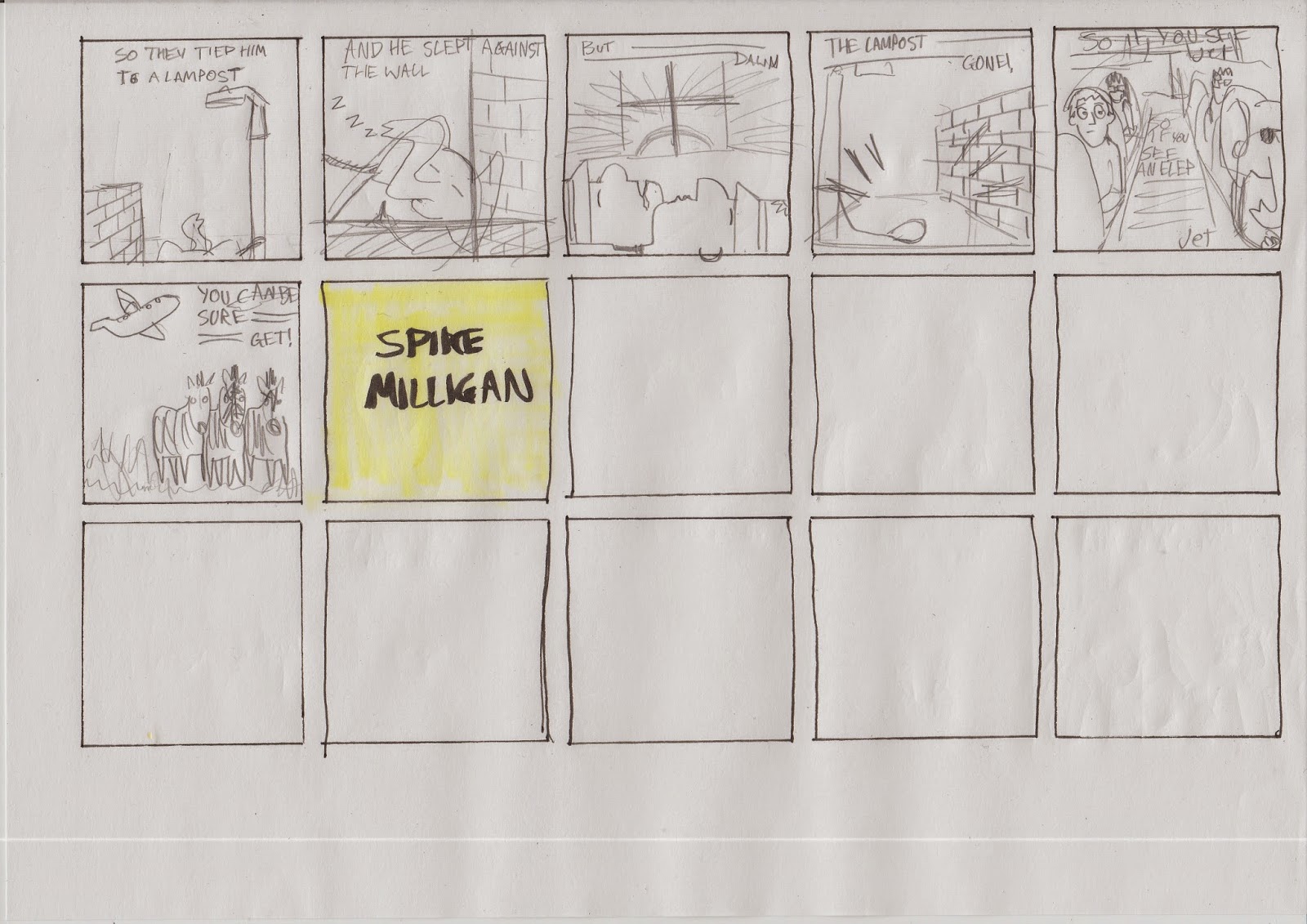 To see how it works as a gif, I scanned in what I had after I'd drawn out the first stanza.

Some thoughts... I think I'll edit it to have static backgrounds as the animation is a bit jerky. Possibly add more frames for smoother animation. This stuff I'll probably revisit once I've finished the rest of it but good notes to keep in mind. I'm thinking of maybe making it into a proper animation as a final product and adding audio.

Posted by Edwin Burrow at 20:07 No comments: 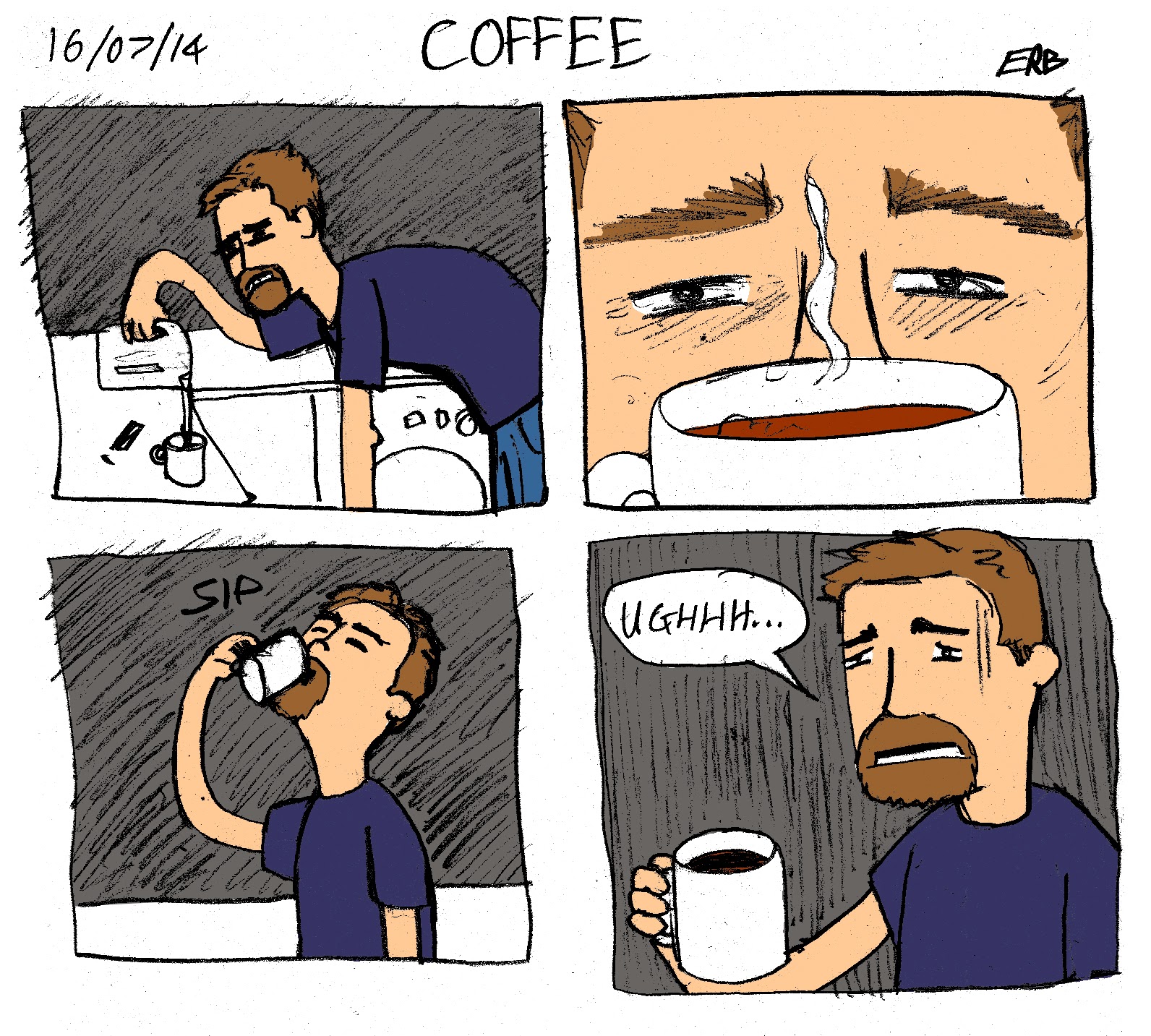 Only scanned it today but I did this over a month ago. I've been trying to make myself like coffee, it's working slowly I think.

Posted by Edwin Burrow at 17:27 No comments:

Email ThisBlogThis!Share to TwitterShare to FacebookShare to Pinterest
Labels: comics 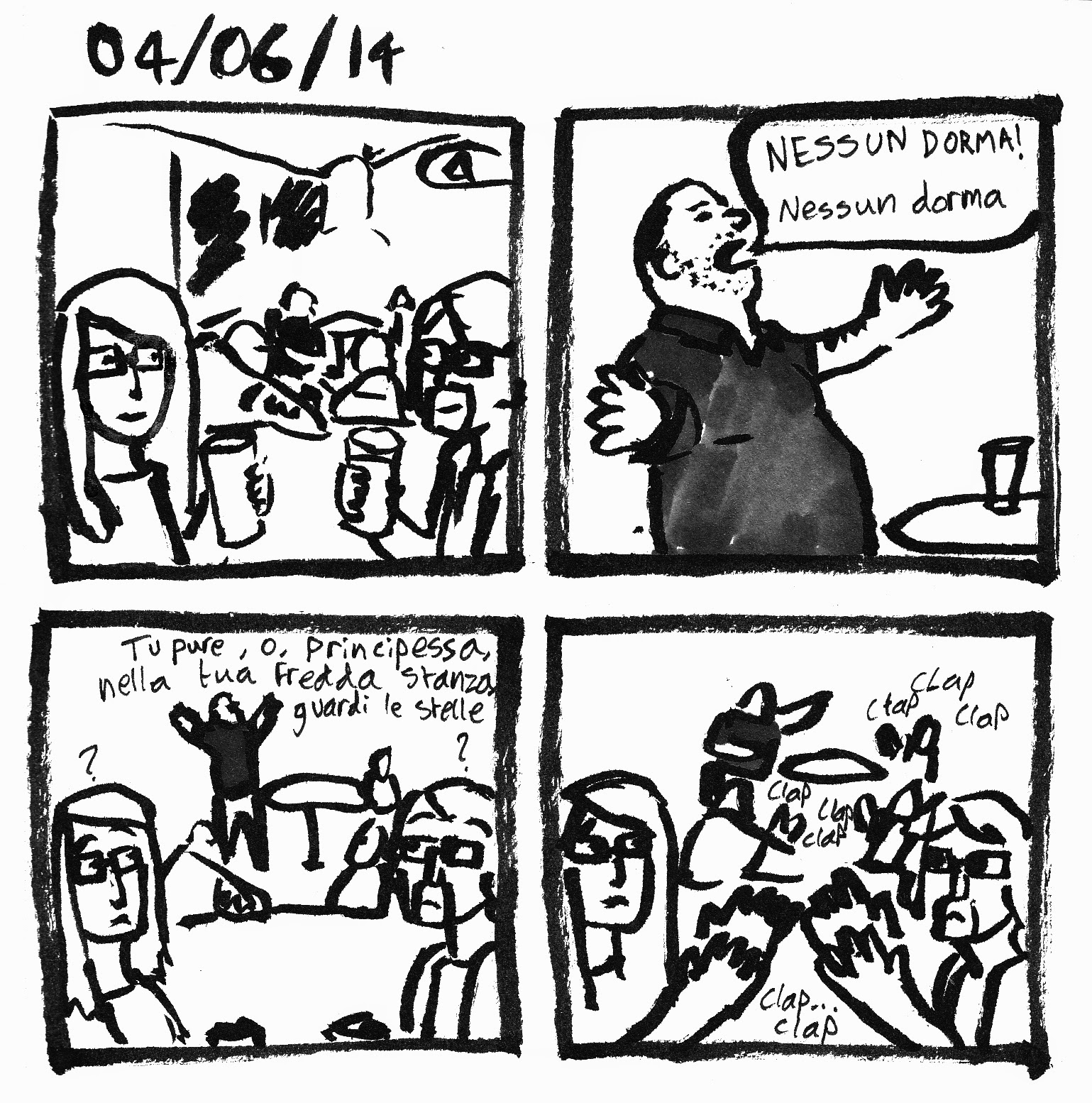 Forgot to upload this, twitter got the exclusive - ahahah... People scramble to see my not so daily comics. Me and Becky were having a post meal drink when this taxi driver type guy got up and began to sing opera. He was applauded afterwards but I think it was mainly for his commitment to it than raw talent.
Posted by Edwin Burrow at 17:25 No comments: