This year two new conventions started; Edencon in Carlisle, held at the University of Cumbria, and Lancaster Comics Day, held in Lancaster Library, in Lancaster. (Lancaster.)

This is great news for the comics industry, it's good to see events start up. Perhaps it's just because I'm from a small seaside town but comics haven't really been big in the UK but it looks like that's changing. WHICH IS GREAT. I'm sure there's more events that have propped up this year or in recent years (LICAF in Kendal to name one) but I'm rambling about these specific events because I attended them both on the University of Cumbria Comic Book Collective stall (or UOCCBC). Unlike previous times I've sat on the stall, at Edencon I was trusted to set up the stall and manage it for the most part of the day. I think it wasn't long after Edencon that I discovered Lancaster Comics Day was starting and so I brought it to the attention of Lecturer/Bagatelle Editor Nick Dodds. Unfortunately he couldn't make it but instead sent me with all the usual products and in charge of the stall for the day. Which was good experience.

Anyway, here's a few of photos from Edencon 2015 and Lancaster Comics Day 2015 which turns out to not be many because I didn't take a lot of photos. 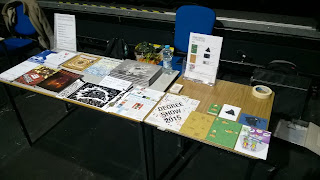 The table for Edencon. We were seated behind the stage where talks and competitions were being held. 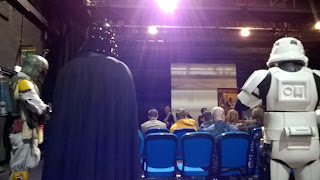 When Darth Vader walked in on an acedemic discussion about comics. 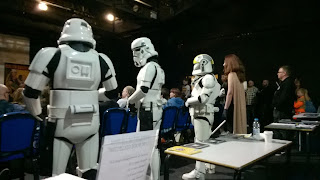 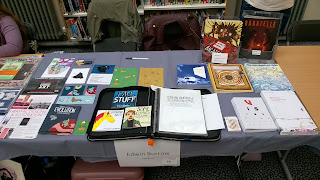 The table for Lancaster Comics Day, which they labelled with my name and not UOCCBC.

Both events were great days, it's always a pleasure to sit on the stalls selling Bagatelle as well as some old University publications and my work/work of other students. I had my latest comic ready for Lancaster Comics Day as well which was exciting to be selling my own work that I'd printed a small run of. After Lancaster Comics Day, I talked with the good people at First Age Comics in Lancaster and stocked my own comic as well as all 4 issues of the comic anthology Bagatelle. So if you happen to be in Lancaster you can find them at First Age Comics:

FIRST AGE COMICS are located at 3 Moor Lane, Lancaster - one of the most historic streets in the city. If you're ever in the area and would like to visit, our opening hours are Tuesday-Saturday 10am-5pm.

What's next up for UOCCBC and myself? The Lakes International Comic Art Festival 2015 on the 17th and 18th October in Kendal which I'll be attending again for the third year running. This time I'm staying in Kendal for the full weekend to experience it without the worries of uni work and travel which I'm very much looking forward to.

Posted by Edwin Burrow at 17:26 No comments:

Wow. I've not used my blog in a while. I suppose because the end of my course got a little hectic at the end and then once moving back to Morecambe I decided to have a break for the Summer. No excuse really.

So my last post was a daily comic, I drew one more after that at the time about growing basil. Thrilling stuff, here's said comic.

That's just part one of many catch-up stories, I'll try keep them somewhat chronological.
Posted by Edwin Burrow at 16:19 No comments: